You are here: Home » News » Moving With Teenagers – How To Avoid Tantrums And Stress

We all know that being a teenager is tough. It’s that fine line between adulthood and adolescence and if you add to this the heady cocktail of hormones and physical growth, it’s easy to see why. That said, it’s often no bed of roses for the parents either and with a constant barrage of tantrums and opinions, many parents are continually walking the tightrope between keeping the peace and total uproar. If this is what it’s like on a daily basis, just imagine if you have an impending move coming up. Just how do you keep them on side? Here are some great road-tested tips for moving with teenagers.

Keep them in the loop
Surprisingly there are a number of parents who don’t want to tell their kids about an upcoming move because they fear a knee-jerk reaction. Think about it for a second. If the shoe was on the other foot and you weren’t told until the last minute that you were moving house, how would it make you feel? Instead, tell them at the earliest opportunity and keep them in the loop. Give your teenager a chance to have their say, they’ll appreciate it as being heard tends to go a long way.

Create a connection
One of the best ways of getting your teenager on board with an impending move is to sell it to them. Try to create a connection between something they love to do and your new area or neighbourhood. If they love sport, then find out if the area has good facilities. Alternatively if they like shopping (what teen doesn’t) find out about trendy clothes shops for young people. Once you’ve made that connection and done your homework, then set about ‘selling the sizzle!’

Losing touch
Friends are important in any walk of life but particularly when you’re a teenager. With this in mind it’s no surprise that your teen is probably worried that they’ll lose touch with their friends. If it’s not a major out-of-state move then make a promise and set a date with your teen to have their friends over as soon as possible. As for making new friends, then that will probably take care of itself.

Delegation
Most teens crave taking ownership, so when it comes to moving day why not give them some. Ask them if they would like to take responsibility for packing their own room and unpacking it when they get to the other end. Give them the chance to rise to the challenge and they’ll thank you for it.

Teenage years are complicated at the best of times but that doesn’t mean to say that home life has to be. By following these top tips it’s going to make for a less stressful move all round and a happier family life.

If you want total peace of mind with your house move then contact On The Move Removals. We’ve been moving the families and businesses of Brisbane and the suburbs for many years and over time have become Brisbane’s most trusted local movers. Why not call us on 044 993 2603 and let us give you a quote. We guarantee that you’ll be pleasantly surprised

Find out how much we can save you! 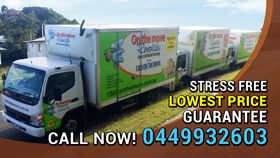